Money, such a sweet thing. It’s an element which is related with finance. Before investment you need advice or guidance to finance. Then you also in need of inspiration which you can get from Money Quotes Sayings by famous people. Let give us the opportunity to provide you some inspirational Money Quotes, Wealth Sayings and some of the best Money Status For Whatsapp In English. It will be a pleasure for us if you can make some benefits and get some inspiration from money status for better management of your money. Scroll down and enjoy, here they are…

Money is made of paper, paper is made of wood, and wood is made from trees. Therefore, money does grow on trees.

Always remember, Money is not everything in life, but, Make sure you earn, sufficient before you think of such nonsense.

Dear ladies.. All men with money aren’t smart. Sometimes a man’s money grows, but he doesn’t.

Don’t Gain The World & Lose Your Soul, Wisdom Is Better Than Silver Or Gold.

When I have money, there is nothing to buy, but when I don`t have money there is everything.

The quickest way to double your money is to fold it in half and put it in your back pocket.

[sq]When it’s your parents money you don’t care… but when it’s your Money, you look at the price and say “Pshh, I don’t think so!”

Neither a borrower nor a lender be, for loan oft loses both itself and friend, and borrowing dulls the edge of husbandry. -William Shakespeare

When I had money everyone called me brother. – Polish proverb

The safe way to double your money is to fold it over once and put it in your pocket. – Kin Hubbard

Money is a terrible master but an excellent servant. – P.T. Barnum

When it is a question of money, everybody is of the same religion. – Voltaire

Money is like muck—not good unless it be spread. – Francis Bacon

No wealth can ever make a bad man at peace with himself. – Plato

Life is a game. Money is how we keep score. – TED TURNER

Not he who has much is rich, but he who gives much. – Erich Fromm

There’s no money in poetry, but then there’s no poetry in money, either. – Robert Graves

Money can’t buy friends, but you can get a better class of enemy. – Spike Milligan 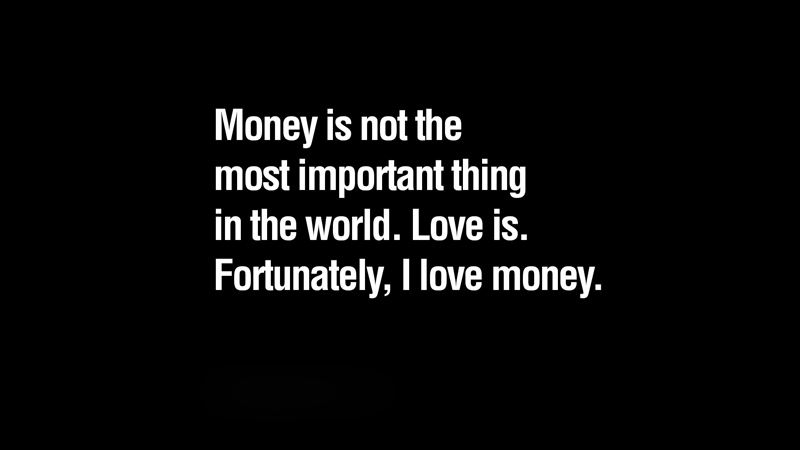 Real riches are the riches possessed inside. – B. C. Forbes

Money and women are the most sought after and the least known about of any two things we have. – Will Rogers

For I don’t care too much for money, for money can’t buy me love. – The Beatles

How many millionaires do you know who have become wealthy by investing in savings accounts? I rest my case. – Robert G. Allen

The lack of money is the root of all evil. – Mark Twain

Everyday is a bank account, and time is our currency. No one is rich, no one is poor, we’ve got 24 hours each. – Christopher Rice

Make money your god, and it will plague you like the devil. – Henry Fielding

Las Vegas is the only place I know where money really talks–it says, “Goodbye.” – FRANK SINATRA

Too many people spend money they earned..to buy things they don’t want..to impress people that they don’t like. – Will Rogers

I’d like to live as a poor man with lots of money. – Pablo Picasso

Where large sums of money are concerned, it is advisable to trust nobody. – Agatha Christie

A little thought and a little kindness are often worth more than a great deal of money. – John Ruskin

Never stand begging for that which you have the power to earn. – Miguel de Cervantes

Try to save something while your salary is small; it’s impossible to save after you begin to earn more. – Jack Benny

Never spend your money before you have earned it. – Thomas Jefferson

If money is your hope for independence you will never have it. The only real security that a man will have in this world is a reserve of knowledge, experience, and ability. – Henry Ford

Every time you borrow money, you’re robbing your future self. – Nathan W. Morris

Money won’t create success, the freedom to make it will. – Nelson Mandela

When I was young I thought that money was the most important thing in life; now that I am old I know that it is. – Oscar Wilde

The stock market is filled with individuals who know the price of everything, but the value of nothing. – Phillip Fisher

Money is only a tool. It will take you wherever you wish, but it will not replace you as the driver. – Ayn Rand

There is a gigantic difference between earning a great deal of money and being rich. – Marlene Dietrich

I made my money the old-fashioned way. I was very nice to a wealthy relative right before he died. – Malcolm Forbes

A good reputation is more valuable than money. – Publilius Syrus

Opportunity is missed by most people because it is dressed in overalls and looks like work. – Thomas Edison

Happiness is not in the mere possession of money; it lies in the joy of achievement, in the thrill of creative effort. – Franklin D. Roosevelt

An investment in knowledge pays the best interest. – Benjamin Franklin

Money has never made man happy, nor will it, there is nothing in its nature to produce happiness. The more of it one has the more one wants. – Benjamin Franklin

The real measure of your wealth is how much you’d be worth if you lost all your money.

If all the economists were laid end to end, they’d never reach a conclusion. – George Bernard Shaw

No one’s ever achieved financial fitness with a January resolution that’s abandoned by February. – Suze Orman

A fool and his money are soon parted. – Thomas Tusser

Money never made a man happy yet, nor will it. The more a man has, the more he wants. Instead of filling a vacuum, it makes one. – Benjamin Franklin

Put not your trust in money, but put your money in trust. – Oliver Wendell Holmes

Empty pockets never held anyone back. Only empty heads and empty hearts can do that. – Norman Vincent Peale

A wise man should have money in his head, but not in his heart. – Jonathan Swift

It is better to have a permanent income than to be fascinating. – Oscar Wilde

A man is rich in proportion to the things he can afford to let alone. – Henry David Thoreau

Many people take no care of their money till they come nearly to the end of it, and others do just the same with their time. –Johann Wolfgang von Goethe

Never spend your money before you have earned it. – Thomas Jefferson

We hope that already you have got the best and they contribute a little motivation which will help you for better management of your money and will change your general thinking about money.