Behind every successful woman is herself.

A strong real woman builds her own world.

As usual, there is a great woman behind every idiot.

A jealous woman does better research than the FBI.

Above all, be the heroine of your life, not the victim.

It is better to be looked over than overlooked. – Mae West

A woman is beautiful when her passions define her more than her looks.

For most of history, Anonymous was a woman. – Virginia Woolf

As usual, there is a great woman behind every idiot. – John Lennon

I’m no model lady. A model’s just an imitation of the real thing.

A real woman can do it all by herself, but a real man won’t let her.

In love, women are professionals, men are amateurs. – Francois Truffaut

A weak man can’t love a strong woman. He won’t know what to do with her.

A little girl seeks revenge. A real woman moves on while karma does her dirty work. 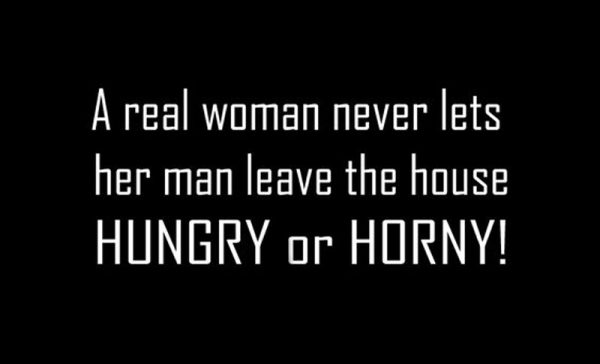 A real woman will be standing behind her man, to back him up whenever he falls.

We women talk too much, but even then we don’t tell half what we know. – Nancy Astor

Women like to sit down with trouble – as if it were knitting. – Ellen Glasgow

Give a girl the right shoes and she can conquer the world. – Marilyn Monroe.

I do not wish women to have power over men; but over themselves. – Mary Wollstonecraft

A real woman needs a man with real intentions, not a boy who can’t pay attention.

Real women is she who knows herself, loves herself, accepts herself…just the way she is.

I do not believe in using women in combat, because females are too fierce. – Margaret Mead

Being a woman is a terribly difficult task, since it consists principally in dealing with men.

An elegant woman is a woman who despises you and has no hair under her arms. – Salvador Dalí

I’m tough. I’m ambitious. I know exactly what I want. If that makes me a bitch, I’m OK with that. – Madonna

MONEY will bring you the GIRLS YOU WANT…but STRUGGLES will give you the WOMAN YOU NEED.

No woman really wants a man to carry her off; she only wants him to want to do it.

On the left side of a strong woman, stands a strong man; he is strengthened by her character. – Ellen J. Barrier

A real woman avoids drama, she knows her time is precious and she’s not wasting it on unimportant things.

Boss women are classy, strong, independent, loyal and lovable. They know what they deserve and they go for it.

A wise woman likes but doesn’t love, listens but doesn’t believe and leaves before she is left. – Marilyn Monroe

Real women are strong, resilient, independent, loyal and lovable…One thing about them is they know they deserve better.

A real woman knows how to value a relationship no matter how many Men come, she doesn’t care! Because for her, her man is the best.

A wise woman knows importance of speaking life into her man. If you LOVE him: BELIEVE in him, ENCOURAGE him and be his PEACE.